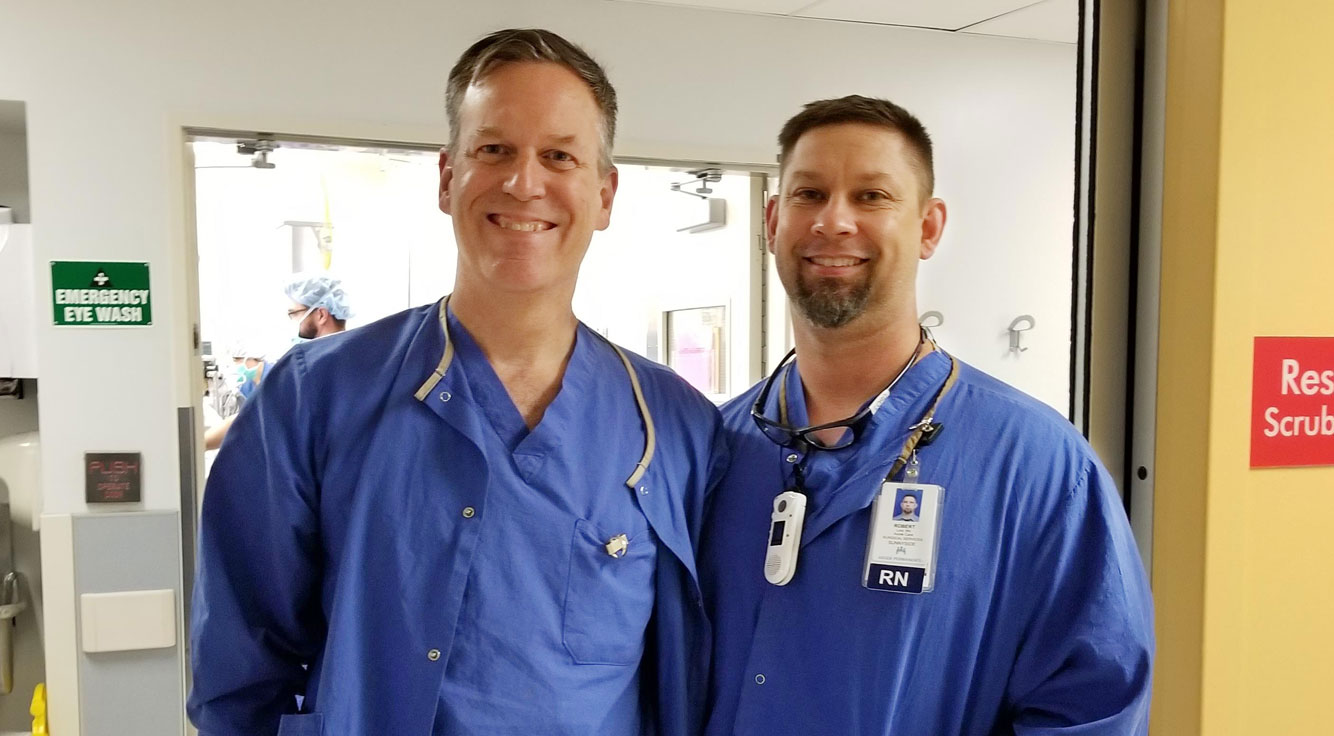 From steel mill worker to nurse — a Northwest member’s journey

Over the past 13 years, Robert Lord has traded in his hardhat and steel-toed boots for sterile scrubs, a mask, and booties. And in June 2017, the former steel mill worker became a nurse on the surgical services team at Sunnyside Medical Center.

Robert credits his career change to David Parsons, MD, a colorectal surgeon and director of Operations for Hospital Services. Dr. Parsons not only cured Robert’s ulcerative colitis, but ultimately inspired him to pursue a career in health care.

From life-saving care to life-changing care

“Dr. Parsons’ influence and the care that I received at Kaiser Sunnyside literally changed my life,” Robert says. “It was like talking to a regular guy. He’s probably saved thousands of lives in his career, yet he treated me as if I was his only patient. I was unsure where my life was heading, but after my experience as a patient, I knew I wanted to be part of the medical field.”

At the age of 35, Robert found the grit, perseverance, and passion to go back to school. He first became a registered nurse, and later became a scrub nurse who works in surgery. To achieve his dream, Robert worked days in a steel mill while attending school in the evenings.

After earning his RN degree, Robert gained valuable experience at a home health agency, an ambulatory surgery center, and a trauma hospital — all while hoping for a chance to join the care team at Kaiser Permanente.

“I had Kaiser Permanente insurance my whole life and liked the way they treated me,” says Robert. “I wanted to be part of this organization.”

Like a professional baseball player getting called up to the majors, Robert was hired for his dream job at Sunnyside Medical Center just a few months ago. Best of all, he even gets to work with Dr. Parsons sometimes.

When Robert told the doctor how he’d influenced his career, “I thought it was great to hear his story and have him back,” says Dr. Parsons. “He has an amazing story. I’m proud for him, and thrilled he’s part of the team.”

As for Robert, he’s a happy man. He’s thankful for his good health, a rewarding career at a great place to work, and the opportunity to support Dr. Parsons and other Kaiser Permanente surgeons in the operating room.

“It doesn’t get much better than that,” says Robert.

In the Spotlight ― Find out what’s happening in your area: