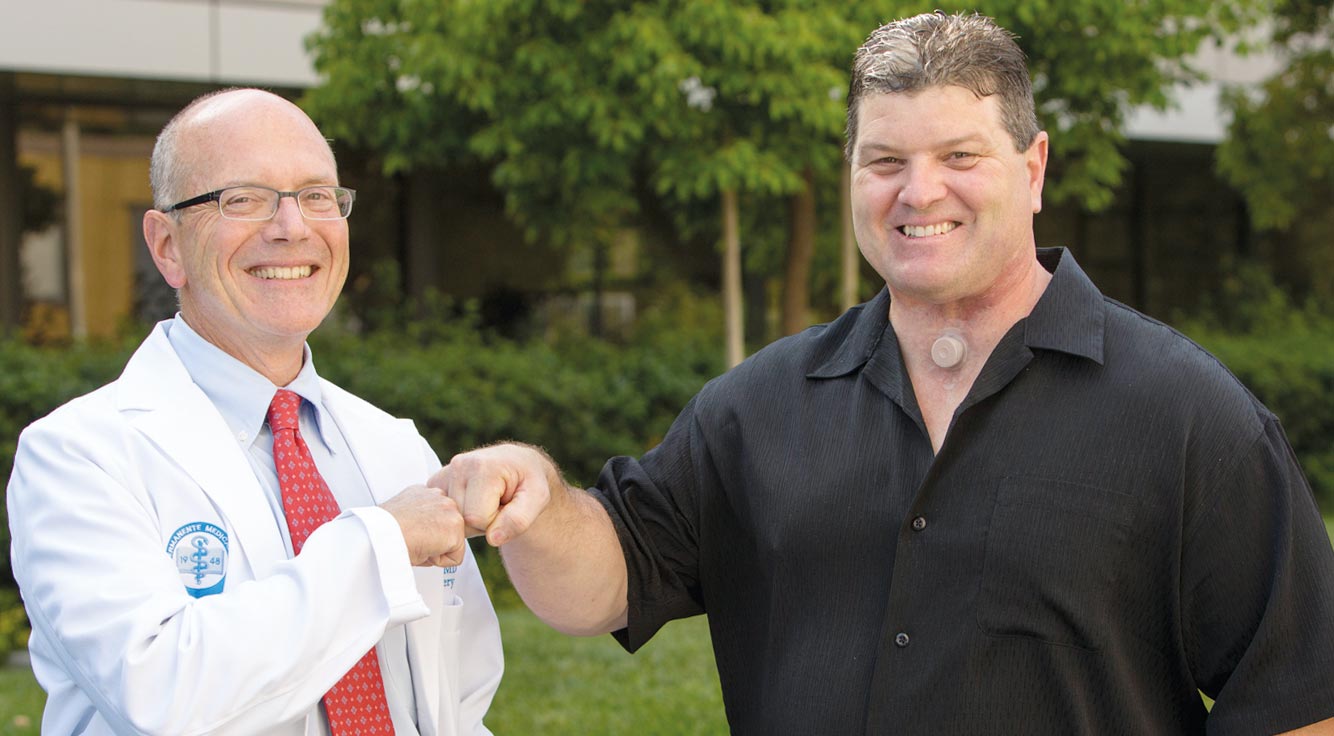 Rescuing the rescuer in Northern California

As first responders, firefighters are used to being the ones who help others in an emergency. But when firefighter Chris Gauer was diagnosed with laryngeal cancer of the vocal cords, his physician rallied a team of Kaiser Permanente specialists to help him.

Gauer enjoyed good health until 2012, when a stubborn sore throat made it nearly impossible for him to speak. He scheduled an office visit with Charles Meltzer, MD, chair of chiefs for head and neck surgery and a physician at Kaiser Permanente Santa Rosa.

Dr. Meltzer had some concerns about Gauer’s vocal cords. Knowing that his patient was a nonsmoker, he recommended voice rest. When that didn’t help, he ordered a biopsy.

Gauer felt devastated by the diagnosis, but after a course of radiation that December he seemed to be better.

“I was feeling good and went back to work after 3 months,” says Gauer.

Soon, however, his voice was raspy again.

“At that point, I was really worried,” says Gauer. “I knew that I had limited options for a second procedure.”

Getting the best advice from experienced specialists

In a follow-up appointment, Dr. Meltzer confirmed that the radiation had not stopped Gauer’s cancer. He then referred Gauer to 1 of 3 specialty care clinics in Northern California. There the Case Conference Board that Dr. Meltzer had founded could review his case.

The board meets online each week to discuss the complex head and neck cancer cases of Kaiser Permanente Northern California patients. Up to 60 physicians participate, ranging from medical oncologists to pathologists. Cases such as Chris Gauer’s are closely studied.

“More eyes and input means the best care for our patients,” says Dr. Meltzer. “No one else can conduct a review on this scale.”

The board reviews and makes recommendations for more than 1,000 cases each year.

“The process is swift and accurate,” says Dr. Meltzer. “We refer patients for evaluation in the morning, the board meets midday, and the patient is given the recommendation directly afterward.”

For Gauer’s case, the board saw only one solution — a laryngectomy. In November 2013, Dr. Meltzer and Jane Yang, MD, removed Gauer’s voice box. They created a stoma (a permanent hole for breathing) in the lower part of his neck.

Despite Gauer’s successful surgery and eventual recovery, he still couldn’t return to the job he’d loved for 11 years. The standard firefighter’s mask wouldn’t protect his vulnerable stoma from smoke.

Amazingly, they created a working mask to fit his needs. While it hasn’t yet been approved for use on the job, the experience gave Gauer hope — and perspective.

“Having gone through something very, very difficult, I haven’t had time to stop to worry about much else,” says Gauer. “I have two beautiful children and a wife who loves me, and that’s all that matters.”

Today, Gauer speaks easily, although with a faint rasp. He lifts weights daily and works behind the scenes at a Bay Area firehouse. As someone who supports emergency services, he’s grateful for the way his entire medical team came to his aid.

“Dr. Meltzer was absolutely crucial and incredible in the way he helped me and took a personal interest in me. He went above and beyond,” says Gauer. “The care I got from everyone at Kaiser Permanente was phenomenal.”

Send an email to insidekp-ncal@kp.org