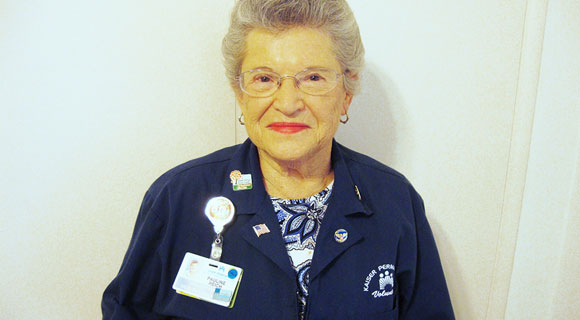 A loyal longtime member and volunteer looks back

Pauline Reich has been a volunteer at our Panorama City Medical Center in Southern California for more than 22 years, and a loyal member of Kaiser Permanente for the past 40 years.

As Kaiser Permanente celebrates its 70th anniversary of providing medical care, Pauline looks back fondly on the quality care that her family has consistently received.

Pauline says she was moved to become a volunteer out of gratitude to Kaiser Permanente and the physicians who cared for her ailing husband and ultimately saved his life.

“My husband’s life was saved by Dr. Santos Galanti,” she says. “Dr. Galanti came to Panorama City in the ‘60s when the Panorama City Medical Center opened, and I have nothing but fond memories of him.”

In 1974, Pauline brought her husband to the ER because he was having a severe asthma attack. He was seen immediately and as Pauline went to phone a neighbor to ask them to watch out for her son, she heard someone calling, “Who is Mrs. Reich?”

It was Dr. Galanti, who told her that her husband’s condition was critical. But he and his colleagues were able to stabilize him, and he went on to live many happy years with Pauline and their 3 sons.

“I later found out that my husband was the first person whose life he (Dr. Galanti) had saved. I kept him in my prayers forever, and years later I learned that he never forgot this incident,” says Pauline.

Today at 86, Pauline still volunteers in our Health Education Department. She also thrives by walking daily, and is motivated by helping others learn more about health and wellness.